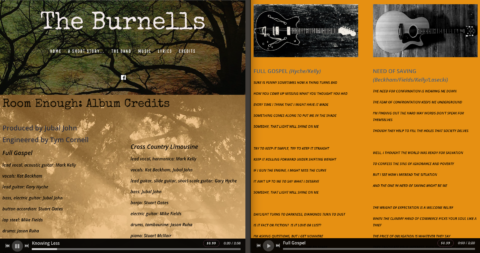 Room Enough is 12 tracks spread across the Americana spectrum from rock, rockabilly, blues, folk, country, and traditional tunes. Anchored by a fine collection of original songs accompanied by a choice Dylan cover, the traditional “Darlin Cory,” and a hypnotic original dirge set to W.B. Yeats poetry, the Burnell’s new album covers a lot of musical territory. Born in 1997 as the Happy Burnells, out of the budding creative partnership between songwriters Mark Kelly and Gary Hyche, the Burnells is an impressive collective of talented musicians with a variety of skills and dynamics putting an original yet raw and contemporary twist on traditional music styles. This gathering of musical souls includes regulars on the Birmingham music scene from numerous recording and performing bands from the past 25 years. A unique talent pool grounded by the band’s primary songwriting team of Kelly on acoustic guitar and lead vocals, and Hyche on lead and slide guitar, also features Kat Beckham on vocals, Mike Fields on lap steel and rhythm guitar, Stuart Oates on vocals, button accordion, and banjo, Jason Ruha on drums, and Stuart McNair guesting on piano and button accordion. Pal of the band and maestro, Jubal John was recruited to produce and play bass on the project and wound up being just what the Doctor ordered, adding musical color with stints on vocals, cello, guitar, and organ along with his rock-solid bass playing.

“Back to Jericho,” a bouncing bluesy tune that features Beckham and Kelly’s dueling vocals is a fine acoustic groove along with some tasty harmonica from Kelly. In keeping with the end of the world theme, “Back to Jericho” is a bleak contemporary image of the American experience where “Mamas are Thirstin’ Babies Goin’ Hungry” and “Painted Faces, Enforced Jubilation” are “All Just Digitized Manipulation.” All of this darkness mixed in with the energetic melody and end-of-each verse refrain of “Get on the Train, Give the Man Your Name” are all the good ingredients of a well-crafted blues folk song designed to raise awareness or call out injustice. This type of music is designed to have a powerful effect on the listener, and The Burnells succeed on this tune.

“Second Coming,” is a deeply moving and hauntingly beautiful dirge laid down as the backdrop for Oates‘ vocal rendition of the famous W.B. Yeats poem, a cautious tale of pending doom from Yeats first published in 1920 when Europe was struggling to survive mass destruction and a pandemic of historical proportions, “Second Coming” also describes a bleak world on the verge of doom. Oates’ vocal delivery and banjo turn this classic poem into an anthem of sorts, a cautionary tale you are forced to accept when delivered with such grace, especially when you add the gorgeous soundscape using a tonal bass drum, cello, dulcimer, and bass expertly delivered by Jubal and Ruha.

The rocker “Full Gospel” cries for redemption, humility, and a shining light to bring the distressed singer to a better place from a roller coaster ride where, “Every time I think that I might Have it made, Something comes along to put me in the shade.”

The Burnells remind us that among the pending ruins there is a quirky, maybe even eccentric woman inspiring the author to help him in troubled and confusing times with the rockabilly-groove tribute, “I Don’t Mind” that sounds like it could be a Sun recording from the 50s, complete with some Scotty-Moore style rhythm picking from Dalzell and bottle-neck slide from Hyche, all wrapped in generous slap-back delay.

Producer, Jubal handles the lead vocals on the Fields penned tune, “Some Days the Dragon Wins,” a jangly pop song about facing your demons, a place where “You’re Gonna Have to Find A Whole New Set of Friends, ‘Cause Someday the Dragon Wins.”

Other standout tracks include the traditional “Darlin Cory,” Bob Dylan’s, “The Groom’s Still Waiting at the Altar, and the country original, “Cross Country Limousine.”

With a set of well-crafted original songs and unique covers, The Burnells take a cynical and often bleak look at the world with their new album, Room Enough. Along the way, this cohesive set of roots music seeks to lift you into a better conscious understanding of a chaotic world on the verge of doom. In traditional terms in our self-proclaimed civilized world, cynics are abundant and a valuable tool to raise social awareness, especially in the creative community where folks need truth to create something meaningful, a community that questions everything to ensure their work if critical, negative, or otherwise disparaging commentary on society, is anchored in deep and often brutal truth, which is increasingly hard to find in the 21st Century’s alternative universe where so many humans now reside. Deep truth captured in lyrical music is a high art form not easy to pull off. When done well, it can serve to not only solidify a movement or philosophy but entertain and deeply move the listener and cement life-long ideals. The Burnell’s timely release of this album scores as a contemporary call to action for anyone paying attention to our world in ruins. 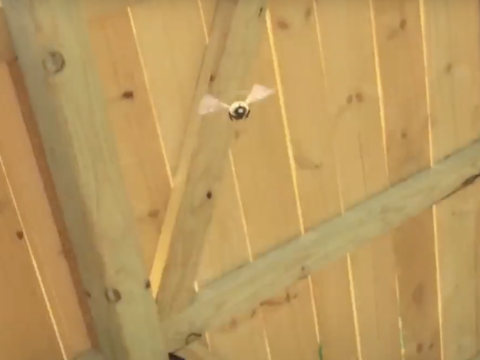 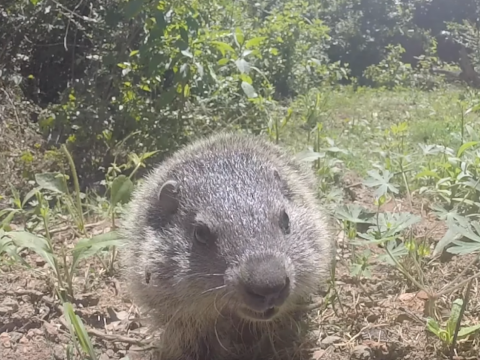